A green industrial revolution for the north 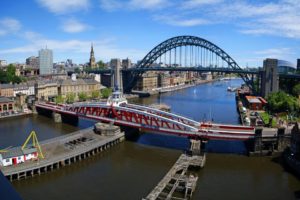 The inspiration for the Northern Powerhouse, when the name was first coined in 2014, was to create a new industrial revolution in the north, addressing the prosperity divide across the UK, generating millions of jobs in modern industries, and allowing the North of England to become a globally competitive economic dynamo once again.

This new industrial revolution has many parallels with the first one two centuries ago. Like then, it will be centred on the North and triggered by technological change. Like then, it will thrive on access to a skilled workforce. And like then, it will require world-class infrastructure to bind the region together and connect with new markets.

But in another fundamental way, it will be unique, because much of the momentum for growth will come from breakthrough green industries. Instead of relying on finite resources, the future northern economy will profit from sustainability and recyclables, using cutting edge technologies that preserve the environment, rather than diminish it.

In fact, this is already happening.

Take the North East, where the physical sites from the region’s shipbuilding industry are now being used to expand green energy. A new green energy park has been launched by Port of Tyne to create a hub for the renewable energy sector. The move comes a few months after the Port was selected as the base for what will become the world’s largest offshore wind farm at Dogger Bank. The project is located 130km off the coast and will be capable of powering up to 4.5 million UK homes each year when complete in 2026. It will build on the Offshore Renewable Energy Catapult at Blyth, a place the government is supporting with a Town Deal to ensure the whole community benefits.

A recent study showed offshore wind could be worth as much as North Sea oil and gas at its peak. That’s why in recent months we’ve announced £160 million funding to upgrade ports and infrastructure across areas like Teesside and Humber. We’ve also chosen Tees Valley to become a trailblazer for hydrogen transport, paving the way for a new generation of hydrogen buses, trucks, trains, planes and ships. The technology is evolving fast. Trials of the first hydrogen train have already begun, and the world’s first hydrogen-powered plane took to the skies at the end of September – both here in the UK.

More conventional forms of green power are also boosting the North’s economy. Once completed in 2022, SSE Thermal’s new Power Station to the west of Scunthorpe will be the cleanest and most efficient gas-fired power station in Europe.

Then there’s electricity. Just a few weeks ago, Nissan’s 500,000th Leaf all-electric car rolled off the production line in Sunderland, one of Europe’s most efficient car plants. Now we’ve delivered a huge boost to the green car industry in the UK by announcing that petrol and diesel cars will no longer be sold after 2030 in this country. Bentley has since revealed plans to move to full electrification of its model range by that date, although its factory in Crewe is already certified carbon neutral. I was delighted that Nissan has confirmed that it will build its new hybrid Qashqai model at Sunderland too.

But even these significant investments will be eclipsed by what’s to come. In recent weeks the Prime Minister has set out his ten-point strategy for a greener Britain, outlining the plans we will take to accelerate our path to net zero. Backed by £12 billion of government funding, and potentially 3 times as much from the private sector, the plan will create up to 250,000 highly skilled green jobs. This vital funding will not only position the UK to take advantage of export opportunities in emerging low carbon markets, it will also help revitalise our industrial heartlands in the North of England.

For example, we will invest up to £1 billion to support the establishment of four carbon capture and storage clusters, which could generate as many as 50,000 jobs by 2030. Among the areas which could benefit are the North East, Humber, North West and Scotland.

Meanwhile, our work to transform the North’s transport infrastructure continues. We’re building HS2 and developing plans for Northern Powerhouse Rail. We’re investing in better and cleaner rail links across the Pennines. We’re working with Northern authorities to extend cycling and walking infrastructure as part of a £2 billion programme. And it’s great to see Northern cities like Leeds roll out fleets of all-electric buses.

In a further boost for the region, the Chancellor announced in last week’s Spending Review that the country’s first-ever national infrastructure bank would be based in the North. This is in addition to a new Northern base for the Treasury, a £4 billion Levelling Up Fund, and changes to the Green Book scheme to prioritise investment in deprived areas – all evidence of the geographical shift in emphasis under this government. As Northern Powerhouse minister, I’ll be working with leaders across the region to establish how best to use these investments, support communities, and recover as fast as possible from the COVID crisis.

The Spending Review also included £100 million more for the Northern Powerhouse Investment Fund, and an additional £146 million for the vital A66 dualling project, which will now be built five years earlier than originally planned.

During the 19th century, the North gifted an economic legacy to the world in the shape of industrialisation, innovation and new technology. Now, in the 21st century, the region has a historic opportunity to lead the world again – and create an enduring Northern Powerhouse.