Business activity key to revitalising the north in 2021 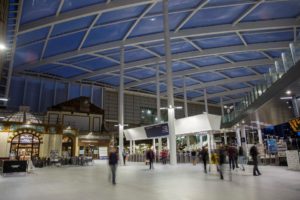 For the thousands of families who have lost loved ones to the Coronavirus, nothing will turn the clock back. But as we roll out our vaccination programme and get a grip on the spread of COVID next year, we will focus our efforts on reinvigorating the northern economy, and replacing the jobs that have been lost during the pandemic.

As Northern Powerhouse Minister, I’m proud of what we’ve achieved so far. £3.4 billion of investment through northern Growth Deals. Almost half of the 100 UK towns to benefit from the £3.6 billion Towns Fund are in the North. In the recent Spending Review, the Chancellor announced a new £4bn Levelling Up Fund to invest in local infrastructure projects. And we’re continuing to devolve power. When West Yorkshire becomes a Combined Authority with a directly elected Mayor in May 2021, over 60% of the North will be represented by metro mayors. Far more than any other area of the country.

One of the best ways we can support the businesses of the North is to boost the region’s infrastructure. So it was great news that the Chancellor also announced a new National Infrastructure Bank headquartered in the North of England to galvanise investment.

Better transport across the North is essential if we’re to tackle the prosperity divide. Strengthening links within and across the region. But also enhancing national links to and from the North.

That’s why the HS2 Bill for phase 2a – taking the railway from the West Midlands to Crewe – currently going through Parliament is so important. Once passed, it will be the first time Parliament has confirmed backing for HS2 to reach the North. HS2 is a long-term investment which will bring our biggest cities closer together, boost productivity and provide a greener alternative to cars and planes for decades to come.

As the Prime Minister highlighted in our National Infrastructure Strategy, Northern Powerhouse Rail is also vital to levelling up the North. So far over £100m has been spent on developing the programme. Despite the financial pressures we are facing, we have protected spending on this project, with another £75 million to progress plans next year.

And there’s so much more investment going into northern transport.

Earlier this year, the government took over the Northern franchise to secure better, more reliable train services for the North. In the past few weeks, the final, long outdated Pacer was retired from the northern network, and last week, the 100th brand-new train made its maiden trip between Leeds and Chester via Manchester Victoria.

Few outside the trainspotting community will mourn the disappearance of Pacers. Although they’ve travelled more than 300 million miles in their 35-year lifespan, they came to symbolise the lack of modernisation in the North’s railway. Now the North has a train fleet befitting the region’s size and economic importance.

Elsewhere, we’re spending £589 million on the TransPennine rail upgrade, to significantly boost capacity and connectivity between east and west.

We’re restoring other vital rail links through the Restoring Your Railway Fund, for example, Clitheroe to Hellefield, Consett to Newcastle, and the Bolton – Rochdale – Bury line.

And soon we’ll introduce a new strategy for rail, replacing the failed franchise model, and making sure that reliability and customer service is prioritised across the North in future.

We’ve also invested £11 billion to improve northern roads over the past five years. We’ve started work on the A19 upgrade six months ahead of schedule. And the Spending Review announced an additional £146 million to speed up the vital A66 dualling programme across the Pennines, shaving five years off the timetable.

We’re rolling out the £4.2 billion Local Public Transport programme so city regions across the North can upgrade public transport and tackle road congestion.

Our new Bus Strategy will help overhaul bus services across the region.

We’re working with northern authorities to extend cycling and walking infrastructure as part of a £2 billion national programme.

We want to complete these projects as fast as possible.

After speaking to every local authority leader, we recently held our second full council meeting. Already, we are looking at a range of schemes spanning the North – from Cheshire West to Tees Valley – to speed up progress.

Last week I also held a roundtable meeting with northern business leaders to discuss how the government and firms can work together to rebound from COVID. It was a hugely positive meeting. Among many issues discussed were the need to improve skills and training to keep young talent in the North; strong support for creating jobs in green industries; working with brilliant northern universities to ensure that innovation is not lost to the south; the importance of transport investment; and the need to develop Humber as the ‘energy estuary’ of the North.

Above all, there was agreement that developing the Northern Powerhouse means building a strong economy. It is business activity and inward investment that will create decent jobs and level up our country so that youngsters in Leeds and Liverpool enjoy the same opportunities as those in London. And given the right conditions and investment, it is northern councils, northern businesses, northern innovators and northern people who will achieve these goals, not Whitehall.

I couldn’t agree more. And after the miserable 2020 that the north has endured, I can’t think of a better way to toast the New Year.