The award-winning Energus in West Cumbria was set up as a conferencing and training centre. Over the last decade, the £21.5 million centre has grown into a centre of excellence for education and training, winning several awards for its nuclear graduates scheme. 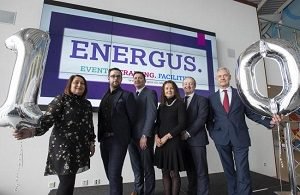 The scheme was initially set up to address skills shortages in the nuclear industry, but was so successful, has been developed to include other sectors. More than 350 people have been trained by the scheme, which sees them take placements at firms across the world.

Energus recently joined our Northern Powerhouse partner programme and have also opened a futuristic cyberlab at its Lillyhall site to help train the next generation to fight cybercrime.

A celebration event was held at Energus and guest speakers were David Peattie, and Jackie Arnold, of the University of Cumbria.

Mr Peattie chief executive of the Nuclear Decommissioning Authority said: “A 10-year anniversary is a massive achievement and this is a source of huge pride that we have this in Cumbria, helping to develop young people. They are working all over the world, making a huge contribution. I visited the workshop here, and it was inspiring to see these young people – we’re going to need these skills and capabilities in the future.”