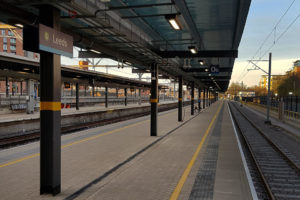 The North made its voice heard in 2016 when it voted strongly in favour of leaving the European Union. Now, after four years of negotiation, it is being rewarded with two great prizes secured by the Prime Minister: full national sovereignty and the biggest-ever bilateral trade agreement signed by the EU.

We have taken back control of our money, borders, laws and fishing waters. Yet, we have also signed a deal with our biggest trading partner based on zero tariffs and zero quotas.

Not only does this deal deliver for the electorate, it charts a true course towards a more prosperous future for northern companies, allowing them to plan with certainty and explore opportunities in every corner of the globe.

Northern businesses have reacted very positively. Sunderland carmaker Nissan said it was looking forward to the continued success of its UK operation following the announcement. And the Chair of the Leeds City Region Enterprise Partnership, Roger Marsh, hailed it as a fair and balanced agreement, the basis for a renaissance in the North’s economy.

Despite the welcome news on Europe, I know the latest COVID restrictions have come as a blow to employers across the region. These are very trying times for firms – there is no getting away from it.

But the threat posed by the new, more infectious strain of COVID is significantly greater than before and these measures are vital if we are to control this killer virus until the vaccines – already administered to more than a million people in the UK – turn the tide.

The massive logistical effort that is the vaccination programme shows what this country is capable of – we have immunised more of our population than the rest of Europe combined, and our main vaccine is British designed and made. So, even in the darkness of mid-winter, we can glimpse a brighter future, one founded on British ingenuity and enterprise.

As Cabinet Minister with responsibility for the Northern Powerhouse, I want to reassure readers that our commitment to levelling up the North remains undimmed. It is front and centre of our infrastructure plans.

In December, for example, I chaired the second full meeting of the Northern Transport Acceleration Council (NTAC). The Council has been created to unblock barriers and speed up delivery of northern transport projects. Indeed, the list of transport schemes NTAC will consider is now clear, so the next task is to select the projects it will accelerate first.

This week, a new platform will be unveiled at Leeds station after final work was completed over the festive period. Hundreds of workers gave up Christmas to work on overhead lines, tracks and signalling, and finish the project for the New Year. The £161 million Platform 0 will allow trains to enter and leave Leeds station much more easily, boosting capacity and punctuality. While it won’t come into full use until May – when the new timetable is introduced – it will be available for trains to use during times of disruption, minimising delays for passengers.

We’ll soon be announcing a new bus strategy to improve journeys across the north, and provide communities with services that meet their specific needs.

We’ll be moving forward with major infrastructure schemes like the Trans-Pennine rail upgrade and HS2, and with our long term £4.2 billion Intracity Fund, which will deliver huge benefits for urban transport in the North.

We’ll be working to restore passenger services on the Northumberland Line for the first time since 1964, when they fell victim to the Beeching cuts. And we’ll continue pressing ahead with an ambitious northern roads programme, tackling congestion and transforming capacity on key routes like the A19 and A66.

It’s been clear throughout 2020 that we are living through extraordinary times – and 2021 will have its share of challenges. But just as we delivered an excellent trade deal with the EU, we will deliver on our other promises, too.

That means delivering on one of the fundamental pledges in our manifesto: making the Northern Powerhouse an industrious, inventive and vibrant reality.