FOOD FORTNIGHT BRINGS A TASTE OF THE NORTHERN POWERHOUSE

As part of 2018’s British Food Fortnight, an iconic Northern cocoa house, a producer of fine cheeses and a world-leading agri-tech firm have become the newest members of the Northern Powerhouse Partners Programme.

Nearing almost 200 members from Northern-based multinationals to plucky start-ups, the Northern Powerhouse Partners Programme is a coalition of businesses who strongly believe in the economic potential of the North and support the need for a combined effort by government and business to realise that full potential.

The 3 newest members are:

Cocogreen UK Ltd: With headquarters in Manchester, Cocogreen are the world’s largest bulk processor of coconut husks and world-leader in agricultural manufacturing, research and sustainable innovation. Their work around edible crops has helped to decrease the region’s reliance on food imports whilst extending production season in berries and fresh salads.

Cows and Co. Group: As a group of artisan cheese producers, farmers and entrepreneurs passionate about developing a brand of high-quality premium food and drink products, Cows and Co. are well placed to be one of the champions for cheese and dairy products proudly produced in the Northern Powerhouse. With dairies across the North, including Appleby in Cumbria, their prime focus is to add value to the rural economy, through investing in premium food and drink, sustainable energy and consulting.

York Cocoa House: Based in York, the chocolate emporium and café York Cocoa House is dedicated to celebrating the chocolate heritage, industry and innovation that York was once famous for. The business has recently embarked on a campaign to bring manufacturing back to the city and are even exploring the new lines of chocolate bars proudly designed and made in the Northern Powerhouse. 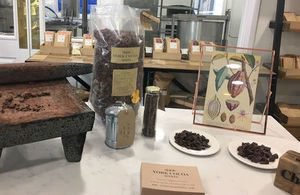 Northern Powerhouse Minister Jake Berry MP said: “From a Cumbrian creamery to crop developers in the heart of Lancashire, food manufacturers and innovators across the North are joining our Northern Powerhouse Partners Programme just in time for British Food Fortnight. We’re seeing one of the greatest coalitions of private and public sector partners ever assembled all coming together to work for the benefit of a strong and resilient Northern Powerhouse economy that is fit for the future.”

Thomas Ogden, Group Commercial Director of Cocogreen said: “Cocogreen are really excited to have joined the Northern Powerhouse Partners Programme. We’re a Queen’s Award-winning enterprise and a finalist in the Lloyds Business Awards for Export with operations across the world but a heart firmly located in Manchester where our Directors met and started Cocogreen. We’re a growing business and have ambitious plans to address key challenges within the food sector including sustainability. We’re innovators in the world of biotechnology and food production and are proud of our business’s work in decreasing reliance on food imports and increasing the production season of fresh produce within berries and fresh salad.”

Stuart Maclennan, Director of Cows and Co said: “Appleby Creameries is delighted to join the Northern Powerhouse Partners programme. As an artisan food business, we are committed to championing all the great foods the North has to offer such as our award-winning cheeses. We are focussed on building an export strategy in order to expand into the premium export markets which we see as being of great value particularly for the agri-food sector. We believe by building local, northern brands both locally and oversees, rural regions such as Westmorland in Cumbria can really put themselves on the global map as part of the Northern Powerhouse.”

Sophie Jewett, Managing Director of York Cocoa House said: “We’re dedicated to celebrating the chocolate heritage, industry and innovation that York was once famous for. As part of this, York Cocoa House has recently embarked on a campaign to bring manufacturing back to the city by opening York Cocoa Works, a chocolate manufacturing, education and innovation facility based in the centre of York. We’re the UK lead for the International Chocolate Awards as well as being an advocate for sustainable sourcing in the cocoa supply chain and are looking forward to becoming more involved in the Northern Powerhouse activity through the Partners Programme.”

British Food Fortnight is a campaign run by Love British Food who are partners of the Department for International Trade’s The Great British Food Campaign.