Kennedys is one of a growing number of organisations from across the north of England that is part of the network, which is working towards building a Northern Powerhouse across several main areas including: connectivity and transport; skills, science and innovation; quality of life and culture; and devolution.

The firm has advised on a number of significant projects in the north of England. In addition to acting on the acquisition of a shopping centre, which forms part of Bolton Council’s £1bn regeneration scheme, Kennedys is appointed to advise the joint venture responsible for delivering the ongoing £1bn Airport City Manchester development, as well as acting on a host of commercial deals that have secured long-term real estate leases in the North, (for example – PMP a Scottish based independent commercial property consultancy, Protector Insurance, a Norwegian insurer and Sheffield United’s new retail site at Meadowhall Shopping Centre).

Innovation is a key driver for the Northern Powerhouse and also for Kennedys. The firm has teamed up with the University of Manchester to develop next-generation fraud prevention software, after securing funding from the Innovate UK Knowledge Transfer Partnership. With assistance from the University, the project will see Kennedys combine its existing fraud expertise and international data sets to develop machine learning techniques. 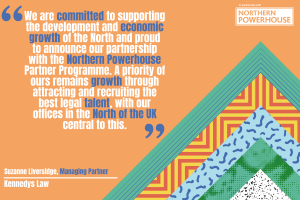 Sheffield-based Suzanne Liversidge, managing partner at Kennedys, says:
“We are committed to supporting the development and economic growth of the North and proud to announce our partnership with the Northern Powerhouse Partner Programme. A priority of ours remains growth through attracting and recruiting the best legal talent, with our offices in the north of the UK central to this.”

Alison Loveday, who is a long-standing contributor to the North West business community, being a board director at Pro-Manchester and Chair of its Skills Committee, as well as being a member of the Northern Powerhouse Corporate Policy Board which launched earlier this year, adds:
“Kennedys’ global footprint means we have seen first-hand the scale of international investment in Manchester and across the North. A successful Northern Powerhouse will ensure Manchester remains an international business hub that drives an inclusive, growing and innovative economy that helps to attract and retain businesses, and the best talent.
“We are delighted to join the Northern Powerhouse as partner and remain committed to forming meaningful alliances with organisations who support this programme and ensuring businesses’ long-term success across the region.”

Minister for the Northern Powerhouse, Rt Hon Jake Berry MP, said:
“I delighted to announce Kennedys as the newest addition to our growing network of over 300 Northern Powerhouse partner organisations.
“As a global law firm with offices across the North, Kennedys is helping pave the way for major infrastructure and regeneration projects, support businesses and drive innovation.
“The commitment of our partners combined with our £3.4 billion Local Growth Fund investment is helping communities throughout the Northern Powerhouse to level up and reach their full potential.”

Kennedys opened its Manchester and Sheffield offices in 2008 and 2010, respectively. These offices specialise in commercial dispute resolution, company and commercial law, corporate recovery, employment, real estate and construction, in addition to all lines of insurance defendant work, such as employers’, public and motor liability (including disease and fraud), professional indemnity and financial lines. The two offices comprise 250 people, 23 of whom are partners.

Kennedys merged with Manchester-headquartered law firm berg in 2017, followed shortly by a move into larger premises in the city to accommodate growth.