Some of the world’s most recognisable brands have signed up to support the government’s plan for the Northern Powerhouse, as new figures show the region’s economy is now greater than that of some European nations.

New Balance, Hitachi, Playdale and Techbuyer have joined the Northern Powerhouse Partners Programme, a government initiative which brings together businesses and organisations from across the North of England. This network of partners believes strongly in the economic potential of the North, and supports the need for a combined effort by government and business to realise that potential.

According to the latest statistics, the Northern Powerhouse is worth over £330 billion a year to the UK economy, and since 2014 its exports have steadily increased. The region now supports around 20% of total UK goods exports – worth £60 billion in 2017. 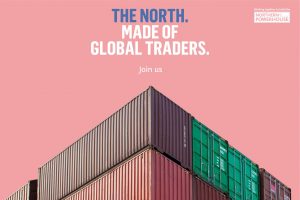 New Balance UK employs 270 people at its site in Flimby, Cumbria producing 500,000 pairs of shoes a week with 80% of sales revenues from exports.

Hitachi has established a state-of-the-art train factory in County Durham which employs over 730 people. The team of train builders, including over 50 apprentices graduating this year, is building pioneering trains using Japanese bullet train technology. Hitachi has also co-founded a technical college, with students going on to work in the factory. Their trains are manufactured in the UK for use across Europe.

Playdale’s head office, manufacturing facilities and global distribution centre are situated on the edge of the Lake District in Cumbria. To date, they have created over 22,000 play areas in 47 countries across the world.

Techbuyer is one of the fastest growing tech businesses in Britain with 57% of its sales coming from outside the UK. Employee numbers at the company’s plant in Harrogate, North Yorkshire have increased by almost 200%.

Barry Leahey MBE, Managing Director of Playdale, said: “We are extremely proud to become a Northern Powerhouse partner and will do all we can to encourage and inspire other Northern businesses, not yet exporting, to work with the Department for International Trade and explore their exporting potential. Playdale is a Cumbrian family business dating back to 1735 that now manufactures and sells playground equipment in 48 countries globally. Not only does this demonstrate and promote the economic strengths of northern businesses like ourselves, but it provides a huge boost to local supply chains too. If we can you can!”

Karen Boswell OBE, Managing Director of Hitachi Rail in the UK, said: “Our British train builders are using Japanese bullet train technology to create a truly world class factory in the North East. Our presence in the North East supports thousands of jobs through using local suppliers, with over 70% of our parts coming from the North.”

Kevin Towers, Managing Director of Techbuyer, said: “Techbuyer has found everything we need to run and grow our business right here in the North and we’d like to promote the opportunities and potential we see around us. Last year, over 57% of our sales shipped internationally and having our main distribution centre in North Yorkshire has been great for national and international trade. We live and work in a thriving location with a wide range of businesses – from SMEs to international, traditional to innovative – providing us with services, customers and stock suppliers. Increased connectivity and investment is surely key to addressing the current imbalance between North and South and showcasing the development and successes of Northern businesses like ours is one way to achieve this.”

Fran Allen, Vice President of New Balance’s EMEA region, said: “We are delighted to become a member of the Northern Powerhouse Partners Programme. As a manufacturer, exporter, and contributor to the regional Cumbrian economy, we see the enormous potential in being a part of this collaborative effort, by the government. It is a grand initiative which stands to link the great communities of the North, boost economic growth, and, together, make the Northern Powerhouse a reality.”