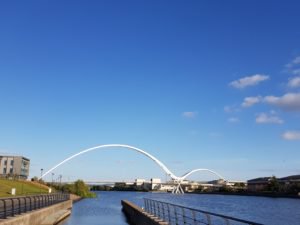 The North East can be proud of the role it is playing in the battle to defeat Covid. Not only is it home to the UK’s first integrated Covid hub in Gateshead, which has dramatically increased testing capacity, it is now playing a lead role in our world-beating vaccine programme too.

Last week it was confirmed that sixty million doses of the Novavax vaccine will be manufactured in Billingham, Stockton-on-Tees, for delivery in the second half of this year. Novavax was found to be 89.3% effective in preventing Coronavirus among trial participants, including against the new UK variant, and will become the fourth vaccine to bolster our fightback against the pandemic.

The North East is also leading efforts to inoculate its population against the virus, as the Guardian newspaper reported last week, in a feature headlined: Why is Newcastle so good at Covid-19 vaccinations? Newcastle was the first UK city to vaccinate all eligible care home residents, and by bringing all 31 of its GP practices together under one roof, it has created a mass vaccination centre capable of administering 30 jabs every five minutes. Further mass vaccine facilities will be opened across the region soon.

Every jab brings the end of this terrible pandemic one step closer. There’s rising evidence that just one dose provides significant protection against further infection, and could cut transmission rates by up to two thirds. So while production and distribution of the vaccines are the Government’s top priorities right now, we also need to prepare for our economic recovery. And as Transport Secretary, I am exploring ways we can build back better by improving transport links.

In my last blog I explained how we were reversing the Beeching rail cuts of the 1960s, and investing £34 million to start work on reopening the Northumberland rail line between Newcastle and Ashington. I am delighted to report this time that Middlesbrough station is also to receive a £34 million upgrade, allowing the return of direct trains to London by the end of this year.

The work includes extending platform 2 to allow more and longer trains to use the station, including the LNER Azuma services which run on the East Coast Main Line. It will also boost local routes so passengers in Teesside, Darlington and Hartlepool can enjoy faster and more frequent services.

Further improvements to the station will see construction of a new platform 3 and a redesigned entrance. This significant project further underlines our commitment to levelling up the North East.

One of the key drivers for local growth across many parts of the country are the devolved authorities led by Mayors, such as Tees Valley, Greater Manchester and Liverpool City Region. Local leaders across the Northern Powerhouse give these regions a stronger voice, and make the case for greater investment to increase economic growth. That is why the devolution deal with West Yorkshire brought into law last week is so crucial.

The region will now elect its first ever Mayor, who will oversee an annual £38 million budget as well as new powers over transport, education, housing and planning. In total, the new Mayoral Combined Authority will have access to over £1.1 billion of funding. The Mayor of West Yorkshire will also become the region’s Police and Crime Commissioner.

We are investing massive sums to level up the North and build a strong and dynamic region, backed by local leaders with the means to make decisions. So adding West Yorkshire to the list of Mayoral Authorities is another important landmark in the development of the Northern Powerhouse.

I can’t finish a blog which has referenced both West Yorkshire and Covid without expressing my huge sadness on hearing the news earlier this week that Captain Sir Tom Moore had died. Coming from Keighley, he was truly one of Yorkshire’s finest sons. I had the privilege of meeting him last year to present him with the first ever Veteran’s Railcard. He was genuinely one of the most extraordinary people I have ever met. Charming, funny, completely on the ball – and endlessly optimistic. He packed a lot of life into his 100 years. What was even more impressive was how much he packed into his final year. Not just raising a huge amount of money for the NHS – but also raising the spirits of the whole nation.