• Minister meets Northern Powerhouse Partner, the Peel Group, to discuss calls for a ‘Free Port’ for Liverpool and their plans for a Maritime Knowledge Hub 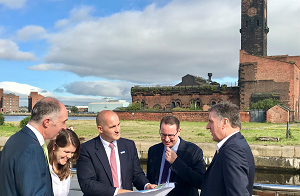 Northern Powerhouse Minister, the Rt Hon Jake Berry MP, has endorsed ambitious economic regenerations plans for Liverpool on his first official visit to the North since his promotion to Cabinet.

On a tour of the Mersey Waters Enterprise Zone with Liverpool City Region Mayor Steve Rotheram, the Minister saw first-hand the Wirral Waters regeneration scheme which is transforming the 500 acre Birkenhead docklands into a pioneering, mixed use waterside city extension.

Delivery of this masterplan is already well underway, with one major development – the Wirral Metropolitan College moving into their new £10.5m RIBA campus – thanks to £2.7m investment from the Government’s Local Growth Fund.

The Minister also met senior executives from the Peel Group – a member of the Government’s official Northern Powerhouse Partners Programme – who are researching the potential for a ‘Free Port’ for Liverpool.

Freeports are hubs for business and enterprise for both manufacturing and services trade. These could be free of unnecessary checks and paperwork, and include customs and tax benefits. These zones reduce costs and bureaucracy, encouraging manufacturing businesses to set up or re-shore. The most successful Freeports globally attract businesses and create jobs for local people through liberalised planning laws.

Earlier this month, the Government announced a new Freeports Advisory Panel to advise on establishing up to 10 Freeports after the UK leaves the European Union on 31st October.

Peel L&P, part of the Peel Group are also drafting exciting plans for the development of a Maritime Knowledge Hub within the Wirral Waters priority regeneration area – creating a centre of excellence and a platform for maritime businesses to grow within the Liverpool City Region. 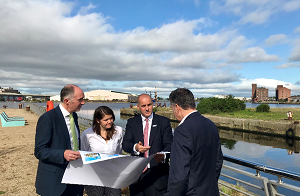 Northern Powerhouse Minister, the Rt Hon Jake Berry MP, said:
“As a proud Scouser born and bred on Merseyside, Liverpool is the obvious place to make the first visit in my new role, see how the Northern Powerhouse is already making a massive difference to people’s lives and set out the Government’s plan to level up our regions.

“So far we have committed a game-changing £1.3billion across the Liverpool City Region and established a powerful Metro Mayor with a war chest of responsibilities to drive jobs and growth. The Northern Powerhouse agenda is delivering for Liverpool, but there is so much more to do.

“Liverpool is one of the most forward-thinking cities in the UK thanks to the Government’s devolution agenda and major investments being made by companies like the Peel Group. They embody the dynamism and character of the area and its people.”

Deputy Chairman of the Peel Group, Neil Lees said:
“As part of our ambitious £50bn Ocean Gateway strategy, through its investments, Peel Group has already seen more than £750 million invested in facilities and infrastructure at the Port of Liverpool and along the Manchester Ship Canal including schemes such as Liverpool and Wirral Waters – which is one of the most significant regeneration projects in the UK.

“In addition to this, we believe the Ocean Gateway strategic corridor creates new