Northern Powerhouse partner, technology firm Connexin has been announced winners of the IoT Breakthrough Award for Smart City Deployment of the Year, for their Newcastle Smart Road pilot.

Connexin fought off stiff competition to join an impressive array of companies winning awards from other categories including another Northern Powerhouse partner, Vodafone, as well as Samsung, Toshiba, Philips, Sony and Fitbit.

The program recognises pioneering technologies and exemplary companies that are driving innovation in the Internet of Things (IoT) market.

Nominations were evaluated by an independent panel of experts within the IoT industry, with winners selected based on a variety of criteria, including most innovative and technologically advanced products and services, evaluated nominations. 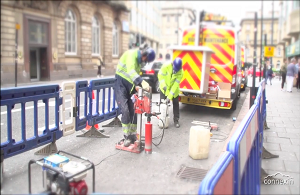 Furqan Alamgir, CEO & Founder at Connexin said: “This award demonstrates our leadership in this space and shows we can compete and win on a global level. I’d like to acknowledge and thank the partners we collaborated with on this project, without whom it would not have been possible. Smart technologies have now come of age, but the truth is no single organisation can make smart cities happen on its own. Governments, businesses, the education sector and citizens need to work together to grasp the opportunity. The sum is way greater than the individual parts. This project is a perfect demonstrator of all the parts working together.”

IoT Breakthrough is an independent organisation recognising the top companies, technologies and products in the global Internet of Things (IoT) market, that drive innovation and exemplify the best in IoT technology across the globe.