Her Majesty the Queen’s representative, The Lord-Lieutenant of North Yorkshire, Mrs Jo Ropner, attended a special ceremony in November to present Northern Powerhouse Partner, Incremental Solutions, with their Queen’s Award for Enterprise. 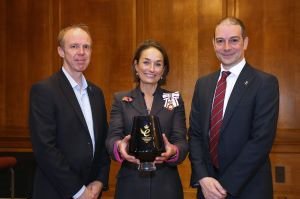 Announced in April of this year, the Queen’s Award for Enterprise was awarded to 200 organisations in the UK, with Incremental Solutions being recognised for their innovative work in the rail sector, where their technology is deployed across the UK rail network helping to prevent incidents and make the network operate more efficiently.

As The Queen’s formal representative, Mrs Ropner was joined by representatives from business-growth bodies InnovateUK and Make it York, the Lord Mayor of York, Councillor Janet Looker – as well as many of Incremental Solutions’ partners and clients – such as Network Rail and GWR.

Sean Bullick, Managing Director of Make It York, said:
“I’d like to congratulate Incremental Solutions on becoming a recipient of the Queen’s Award for Enterprise.
Their innovative work in transport safety and vision for an efficient transport network fit for the 21st century is of great importance to both the industry, and the City of York. It’s great to see them receiving recognition for their achievements in this field.”

Daniel Lee-Bursnall, founder and Commercial Director at Incremental Solutions added;
“The amount of people we’ve invited to this award ceremony is representative of not only how many people have played their part in enabling our systems to benefit the rail network, but also to the importance of the future development and safety of our rail infrastructure. We’re so proud and feel it’s a fantastic achievement and honour to be representing not only the North, but also all innovators who are improving the things we often take for granted.”

The event took place in York where Incremental Solutions are based – and is also a city of rich rail-related heritage. Fittingly, the ceremony celebrating the future of the rail network was held at the Grand Hotel, which of course is part of its past.

About Incremental Solutions
Incremental Solutions provides award winning GPS data visualisation and analysis software tools, for the rail and automotive industries. We are focused on quality of service whilst delivering cutting edge features for clients to help make real world improvements in the performance of their smart transport networks.