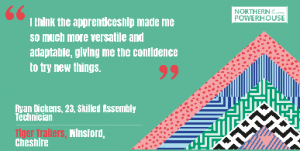 Ryan, 23, is a Skilled Assembly Technician at Tiger Trailers in Winsford, having joined the company in 2015 as a Manufacturing Engineering apprentice. During college, when working part time in a fish and chip shop, Ryan decided he wanted to do an apprenticeship in manufacturing and engineering. His motivation was the possibility of gaining a qualification whilst being ‘hands-on’ within the industry and being able to earn at the same time.

Ryan began his apprenticeship with another manufacturing company in Winsford which unfortunately went bankrupt. He decided that Tiger Trailers would be a good fit as it was a new, local company, that was experiencing very quick growth. During his apprenticeship, he had the opportunity to carry out a variety of tasks including piping & wiring, coach building, working on hydraulics and fitting tail lifts, his favourite of which was working with hydraulic systems.

“My day to day work was monitored by my mentor, which was really useful as he could provide me with one-to-one feedback and push me out of my comfort zone. I gained skills I can transfer to other parts of the job, which is really valuable” 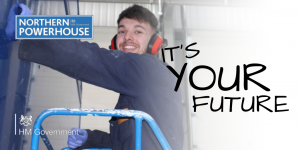 A particularly enjoyable part of Ryan’s apprenticeship was the rotational aspect of the structure, as he was able to gain so much more than he would in a more stationary position. Additionally, Ryan is proud to have won the Tiger Apprentice of the Year award.

“I think the apprenticeship made me so much more versatile and adaptable, giving me the confidence to try new things”.

Ryan has learnt the role through his apprenticeship to the point where he is now given the responsibility of training new members of the team, giving him further opportunity to develop his leadership and teamwork skills.

“As an apprentice, you have to learn every part of the workshop. It’s made me so much more knowledgeable about the company and the wider industry, and I find it easier to remember and learn all the new information as it’s right in front of me and very hands-on, rather than being in a book or online”.

In the future, he would like to progress within Tiger Trailers and become a team leader, supervising the hydraulics sector of the workshop. His interest in hydraulics stemmed from the experiences he had as an apprentice, to which he attributes his ambitions within the industry.

“I didn’t know what I’d want to specialise in before I began the apprenticeship. The wide range of sectors I was exposed to enabled me to work out what really interested me”.