Passengers flying out of the UK’s third largest airport were this morning welcomed onto a giant new pier, which connects to Terminal 2, for the first time. The 216m pier – longer than Manchester’s Beetham Tower is tall – provides extensive panoramic views of the airfield and will be used by all airlines currently operating out of T2. The first flights to depart were both operated by TUI Airways and went to Funchal, Madeira, and Naples, Italy. 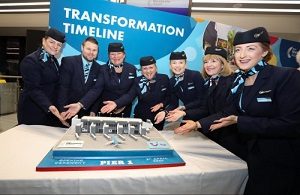 Andrew Cowan, Manchester Airport chief executive, said: “Today is a significant milestone for Manchester Airport as we deliver the first phase of the biggest investment we have made in our 80-year history. We are delighted to wave off the first handful of flights from the new pier, as we build up to bringing it into full operation in the days ahead. What that means is our customers can start to enjoy the new facilities, at the same time as getting a taste of what to expect from the next stages of our £1bn transformation programme.”

He added: “Today is just the start. Over the coming years we will transform the airport for all of our customers, giving the North the world class airport it deserves. The investment we are making and the range of destinations we connect to, in all corners of the world, underlines the vital role Manchester Airport plays in creating jobs and driving growth across the North of England. Having first put a spade in the ground in July 2017, a huge amount of work has gone into getting our new pier and multi-storey car park ready to open today and I would like to thank all of our colleagues and delivery partners for their efforts.”

The new pier was opened at around 4.30am today, with passengers treated to entertainment by the NoTTwins, who featured on Britain’s Got Talent, the Loose Change Buskers, who are raising money for Cancer Research, guitarist Jack O’Malley and Christian Marshall a caricaturist, to mark the occasion.

Also attending the celebrations was TUI Airways crew member Caroline Cox from Bolton. She operated on the first flight out of Terminal 2 to Alicante when it opened back in 1993. Having worked for the company for 33 years, her elder son is now following in her foot steps and is a first officer for the airline.

The pier has been built with more than 300 individual panes of glass and is equipped with 11 gates and airbridges, more than 1,400 seats and stylish wayfinding throughout. The opening marks the next phase of the airport’s transformation programme that will see Terminal 2 become the focal point of its operations. More than 1,750 people are currently working on the project which recently welcomed its 100th apprentice as work gathers pace.

Over the coming weeks more and more flights will gradually move over to the new pier as it becomes fully operational. The next phase of the £1bn transformation is the extension to the existing Terminal 2. Work is well under way and will see the terminal more than double in size. The extension will open in Summer 2020 with 40-plus new food and beverage outlets and shops, followed by a further 40 when the existing building is fully refurbished.

The £1bn investment in Manchester Airport will provide major improvements to the customer experience with new security halls and the latest technological advancements. Once the Terminal Two extension opens for Summer 2020, the existing building will close for refurbishment with it due to reopen in 2022. Further piers will open in 2022 and 2024.

The opening comes as the airport continues to see passenger numbers continue to grow as it attracts further long-haul routes to the likes of Addis Ababa and Seattle. The transformation will ensure the Northern hub can continue to play its role as a global gateway and economic and employment generator, as it plugs the region into key global destinations and widens UK connectivity.