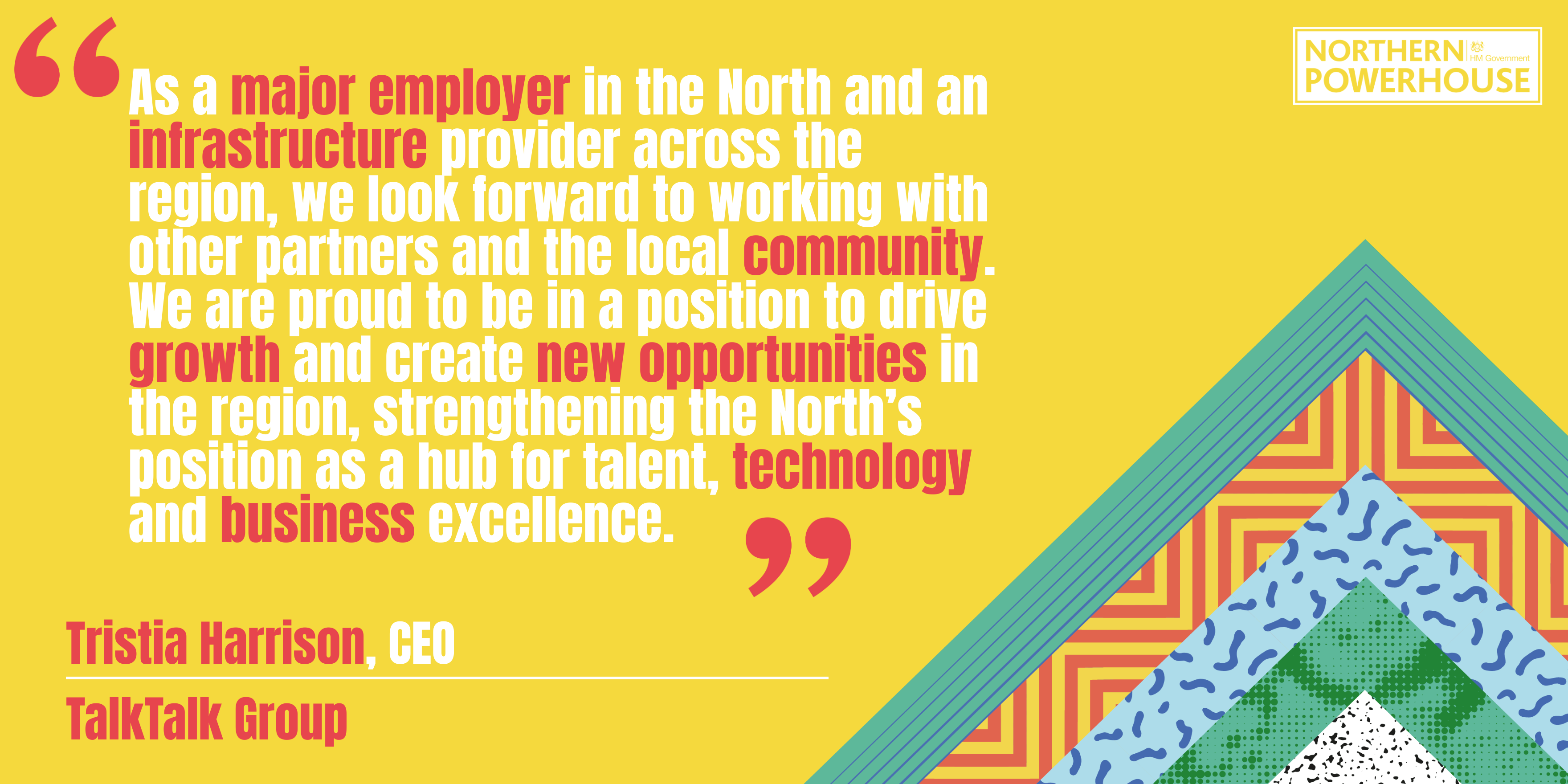 TalkTalk announced its plans to relocate roles from London to its Salford headquarters in November 2018 and it launched a major recruitment drive across the region. TalkTalk has focused on hiring the best talent spanning technology, finance and B2B roles with 350 new roles being created across the Group.

Since February 2019, TalkTalk has filled 591 roles within the business, recruiting 350 new hires, and has achieved 96% offer acceptance, including several senior leadership roles such as the appointment of a new Head of Data and Head of Customer Insights. These new starters being the total headcount in THE Soapworks site in Salford Quays to more than 1.800.

Tristia Harrison CEO of TalkTalk comments:
“Joining the Northern Powerhouse Partner Programme is another clear demonstration of our commitment to the North as we continue to build on our heritage in the region. The success of our Soapworks site in Salford has been tremendous, exceeded expectations, and has enabled us to attract and retain the very best talent as we establish our HQ.

“As a major employer in the North and an infrastructure provider across the region, we look forward to working with other partners and the local community. We are proud to be in a position to drive growth and create new opportunities in the region, strengthening the North’s position as a hub for talent, technology and business excellence.”

“It’s great to see a global brand such as TalkTalk reaffirm its commitment to the region and, with their headquarters now in Salford, they are well placed to continue driving job creation and creating new economic opportunities for hard-working people.  Their recruitment drive and investment in the North of England builds upon £663 million worth of Local Growth Fund support we have provided to the Greater Manchester region.”

TalkTalk has been recognised as one of the UK’s best Large Workplaces by Great Place to Work as a result of its personal development and employee support initiatives. TalkTalk is committed to supporting the local community through its sponsorship of Salford City Football club. As well as this, graduates from Salford University have been placed at TalkTalk, alongside internships for MBA graduates from the University of Manchester.

As a major connectivity provider to millions of homes in the North, this latest news builds on TalkTalk’s work across the region, where it is rolling out and successfully piloting a full fibre network in York and recently announcing it will connect a further 60,000 homes and businesses in Dewsbury to next generation infrastructure.